Important Notice: The IowaWORKS.gov website is currently down due to an external outage with the website vendor. THIS OUTAGE DOES NOT IMPACT THE APPLICATION OR PAYMENT OF UNEMPLOYMENT CLAIMS. Please note the following: 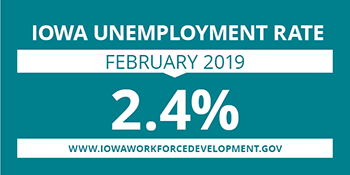 "Despite the brutal winter we have had the past two months, the unemployment rate remains steady at 2.4 percent. Remarkably, we have maintained that rate since June, 2018," said Director Beth Townsend, Iowa Workforce Development. "The total number of working Iowans increased to 1,660,100 which is 5,700 higher than January and 25,500 higher than one year ago. In even more good news, the biggest segment of Iowans who found employment in February are those who have been out-of-the-workforce for more than 12 months. If you're an employer looking for workers, stop by or call one of our IowaWORKS Centers around the state and let us put our top notch business service specialists to work for you. If you are looking for a better job or your next job opportunity, we can help you update your resume and sharpen your interview skills as well as assist you in finding new training opportunities available around the state. The time is now to become Future Ready!” 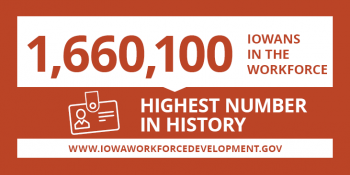 In February, Iowa establishments cut payrolls leading to a drop of 5,500 jobs in total nonfarm employment. This was the first monthly drop since September and fueled by losses in private services. Unusually cold and forbidding winter weather may have had some influence on payrolls. Both construction and leisure and hospitality had losses this month. Private sectors accounted for most of the drop this month (-5,000); however, government also decreased slightly due to losses at the local level (-800). Compared to last year, government is now down 1,900 jobs due mostly to cutbacks at the state level and Iowa total nonfarm employment combined is up just 5,800 jobs (+0.4 percent).

Leisure and hospitality pared the most jobs in February (-2,400) with virtually all of the losses stemming from accommodations and food services. Eating and drinking establishments contracted this month, but should rebound in March when the weather supports more traffic and with regional basketball tournaments in the Des Moines area. This super sector has displayed mixed signals over the past several months and shrank slightly versus last year. Trade, transportation, and utilities shed 1,500 jobs due mostly to declines in transportation and warehousing (-900), although retail continued to trend down in February (-700). This was the first monthly loss for this super sector since October. Smaller monthly losses this month included professional and business services (-900), construction (-400), and education and health services (-300). Only three sectors added jobs this month. Other services added 400 jobs to lead all sectors. The financial services sector gained 200 jobs but has shown evidence of tapering down following expansion over the past several years. Natural resources and mining added 100 jobs.

Compared to last February, manufacturing continues to lead all sectors in job growth (+8,400). All other super sector gains are small by comparison and include professional and business services (+600) and construction (+400). The largest notable losses in Iowa’s economy occur in retail trade (-3,000) and accommodations and food services (-1,700).