Status of the Iowa Workforce 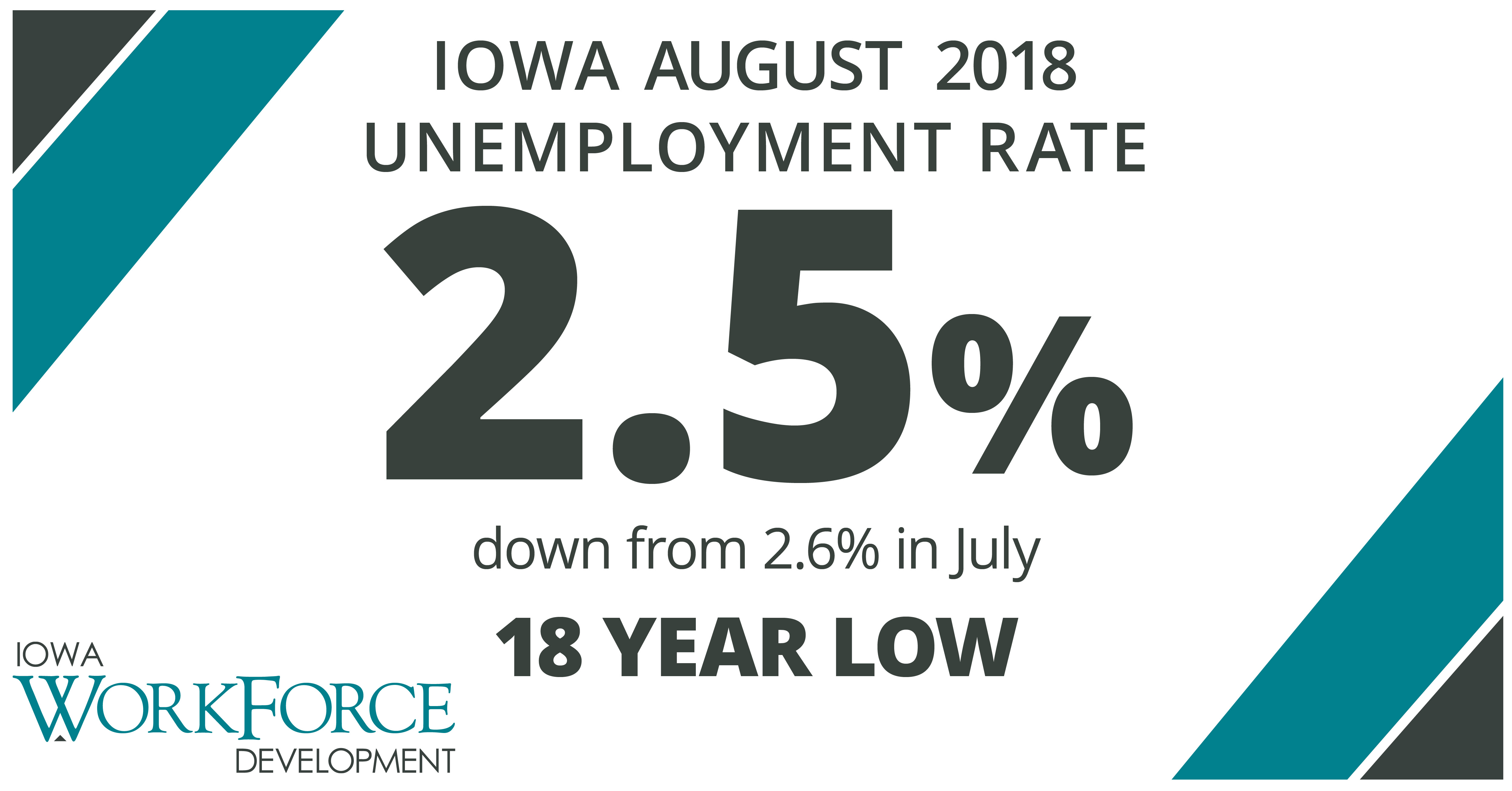 "Not since May of 2000 has Iowa seen an unemployment rate this low,” said Beth Townsend, director of Iowa Workforce Development. “As the unemployment rate continues to drop, Iowans are coming together as never before to find ways to help more Iowans get upskilled as demonstrated by the more than 1,900 community and business leaders who are attending Future Ready Iowa summits. The summits are scheduled across the state and will provide local leaders to develop local solutions to local workforce issues. The response to the summits has been overwhelming and we are working to insure that as many Iowans as possible will be able to attend. While several of the early summits are already at capacity with wait lists, there are still slots available in Centerville, Cedar Valley, Creston, Elkader, Fort Dodge, Des Moines, Ottumwa and Pella.” 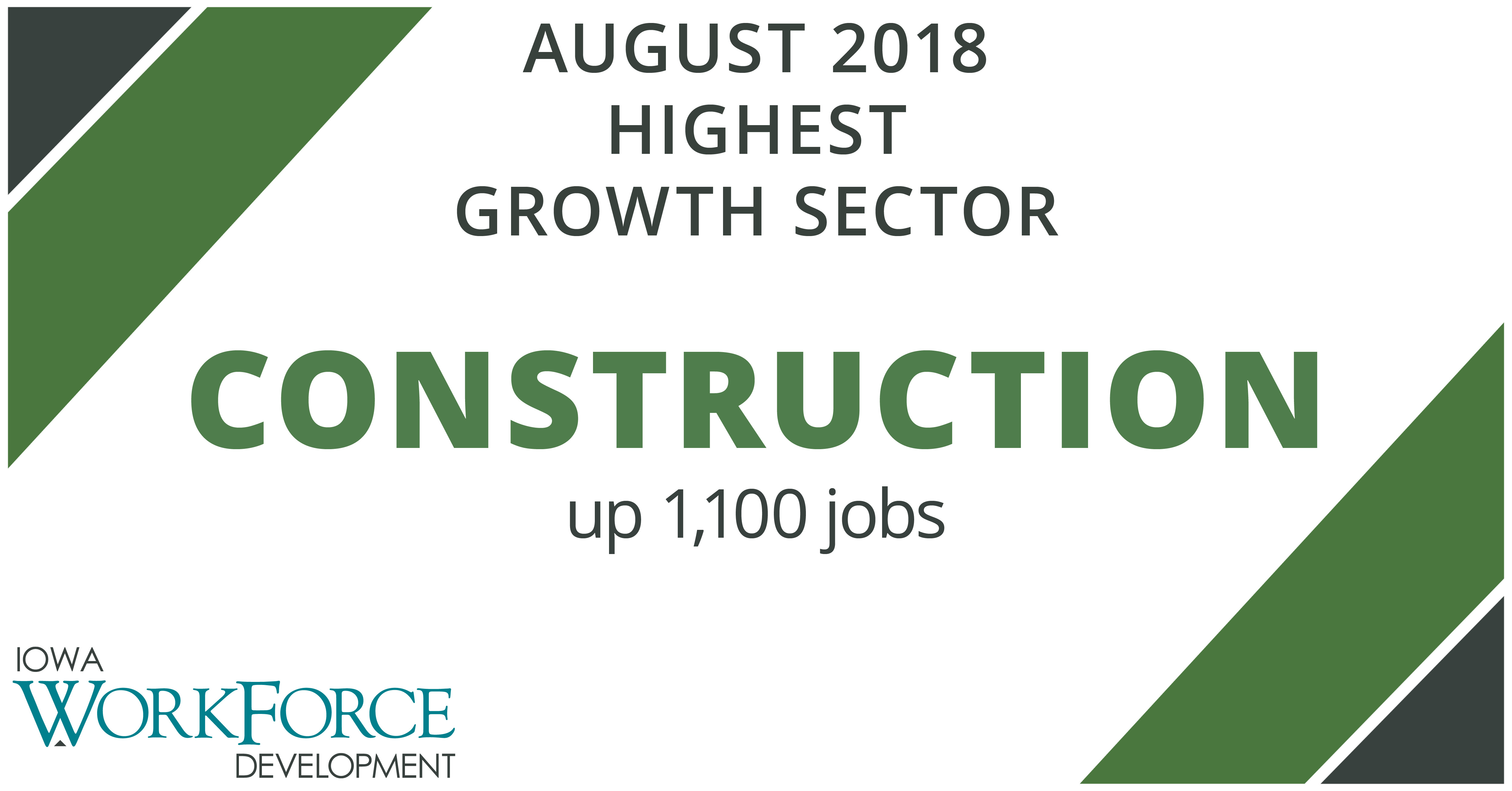 Iowa establishments displayed strong hiring in construction and trade in August and gained 2,300 jobs. The monthly increase follows a slight loss in July and is the fifth increase in 2018 compared to three monthly drops. Goods producing industries continued to fuel much of the growth mostly due to hiring within construction. Service industries were lifted by hiring in government due to larger-than-expected seasonal increases at the state and local levels. The gain of 1,000 jobs in August puts government up 700 jobs compared to last year, whereas total nonfarm employment combined is up 21,100 jobs.

In August, wholesale and retail trade were responsible for a combined 1,700 jobs added, with wholesale outpacing retail by nearly a two-to-one margin. Wholesale trade has had gains in three of the last four months; alternatively, retail rebounded slightly following a large drop in July and has been generally trending down since last year. Construction again added jobs in August (+1,100) and has now added jobs in every month since January. This has been a stark turnaround compared to last year when jobs were added in only two months. Smaller gains this month included education and healthcare services and manufacturing. Losses this month were dominated by leisure and hospitality (-1,100). This super sector pared jobs in virtually all segments, although losses in accommodations and food services slightly outweighed losses in arts and entertainment.  All other losses were small in nature and included finance and insurance, other services, and information services.

Annually, manufacturing continues to advance stretching back to last year. The sector’s growth of 11,000 jobs is more than half of Iowa’s combined total nonfarm employment gain. Construction continues to improve in 2018 following a flat year last year. This sector hovers 5,200 jobs higher than last August. Professional and business services and financial activities also continue to bolster payrolls and are up 2,500 and 2,200 jobs, respectively. Annual losses have been limited to just two sectors: other services (-2,600) and information (-200).

MEDIA ALERT:  To access an audio cut of comments about Iowa's labor market situation click here. Local data for August will be posted to the IWD website on Tuesday, September 25, 2018. Statewide data for September 2018 will be released on Friday, October 19, 2018.